Our Pedigree in Colour

For more than 80 years PPG Industries has been at the forefront of colour in the automotive and refinish industry. Colour continues to play a vital role in automotive styling.

PPG remains at the forefront by working closely with OE manufacturers and styling teams to ensure we provide accurate intermix formulas for every vehicle produced around the world.

Car colours have moved on a long way since the black of the first car built in 1885 – the Benz Patent-Motorwagen – and the subsequent, mass-produced Ford Model-T. Today, the OE manufacturer tries to differentiate themselves with the introduction of more exotic pigments.

Whatever tomorrow brings in terms of automotive colours, PPG will have a formula to match it.

1950s Solid colours only; black, blue, green, and then the successful introduction of white

1960s Metallic pigments were introduced and by the end of the decade accounted for 57% of the market. Blue, green, aqua and beige were also popular

1990s Dominated by white and starting to see the growth of silver. Pearls and micas are introduced

2000s The height of silver and black. Xirallics®, ChromaFlair and ColorStream pigments emerge

2010s The decade has started with a 75% achromatic palette – ¾ of every new car is white, black or grey/silver. New pigments in development to create liquid metal, glass flake and next-generation pearls 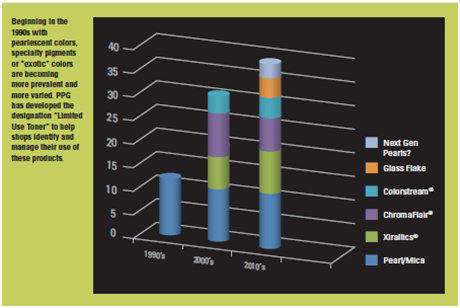